ClinTouch is a revolutionary digital intervention, which was developed through a £1M MRC award (ClinTouch & CareLoop) to investigators at the Farr Institute of Health Informatics Research. This intervention has the potential to: empower better self-management for people with psychosis; reduce serious episodes of psychosis from occurring; improve the lives of individual patients and reduce costs throughout NHS services (e.g. costly unplanned admissions and A&E presentations).

Currently affecting around 1% of the population, psychosis has a high relapse rate. 70% of the costs associated with severe mental health disorders are incurred from unplanned inpatient admissions and the 2012 Schizophrenia Commission Report found that earlier intervention services in psychosis have the potential to save the NHS £119m over three years.

Using a smartphone app as its user-interface, ClinTouch is an end-to-end digital solution that improves communication between patient and practitioner and allows service-users to become active participants in the delivery of their care and their recovery. By closing the information-gap that currently exists between standard health appointments, ClinTouch is able to focus on prevention by incorporating real-time updates into care pathways and alerting professionals of significant changes in their patient’s symptoms.

Through a co-designed smartphone app, ClinTouch prompts its user to record their symptoms and feelings. A unique and bespoke branch of questions then follows ensuring that each question asked is relevant with a graphical bank of user-friendly analytics immediately available for the patient to consider and review. This digital data-log can then be used to help identify any lifestyle or environmental triggers that prompt the onset of symptoms.

ClinTouch has been built into an end-to-end system in two NHS mental health Trusts, with summary data accessible at clinical team desktops and streamed into e-healthcare records. If a personalised pattern of early warning signs for relapse emerges, health professionals can act to enable early intervention.

The ClinTouch team has had meaningful conversations with a number of industry partners exploring models to scale up and sustain the science nationally and internationally. Most notably with Jansen Healthcare Innovations (an arm of Johnson & Johnson) in a series of discussions leading to a potential ClinTouch pilot in the USA.

Developed on the back of a strong academic evidence base, ClinTouch’s rigorous research and development processes confidently validate its clinical impact to potential investors (since 2010 a series of MRC funded trials have confirmed the project’s safety, validity, feasibility and acceptability). The project is also currently considering the possibility of expanding into a social enterprise and was recently the subject of meeting hosted by David Cameron’s senior health policy advisor at 10 Downing Street, to consider the impact that digital technology could have in improving the nation’s health.

The systems and digital infrastructure that underwrite ClinTouch are maximised by The Farr Institute’s network by using its cornerstone platform in related projects. For example, the MRC funded Actissist project (£0.6M) is extending the ClinTouch concept by providing treatment to patients through the use of digital cognitive behavioural therapy via a mobile app.

In addition, the MRC funded ‘REMORA’ project builds on the e-infrastructure established by ClinTouch. Incorporating the use of sensors to gather data, the project is aiming to better understand the role that weather has on mobility for patients with rheumatoid arthritis. The use of an in-phone accelerometer allows the app to collect data passively with patients having only to carry the phone with them as the go about their daily lives. Linking research methods through the Farr Institute’s network has streamlined the pace of progress on this project.

The healthcare sector is being disrupted by digital technology and the area of passive sensing for high-resolution diagnostic signals is becoming increasingly important. The Farr researchers aspire for ClinTouch app to be the self-report symptom assessment system of choice across the UK, supporting the management and relapse prevention of psychosis and depressive symptoms.  As well as providing the digital infrastructure to develop interventions such as ClinTouch, the Farr Institute has been able to facilitate the sharing of research methods in the development of new software, provide hardware for trials and bring together a powerhouse of multidisciplinary digital health skills to improve public health and health service provision. 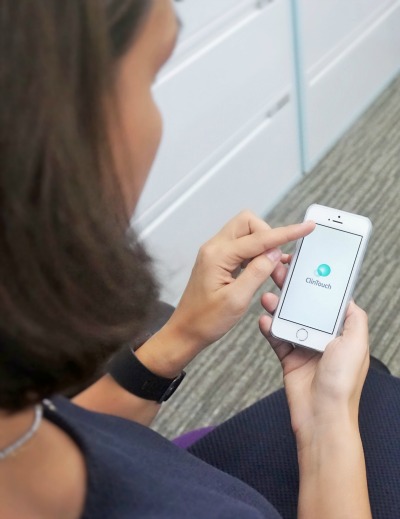