Fancy becoming a surgeon for the day? Join us for a game of EnTRUSTed, which allows players to put themselves into the shoes of NHS staff and run a Hospital Trust. 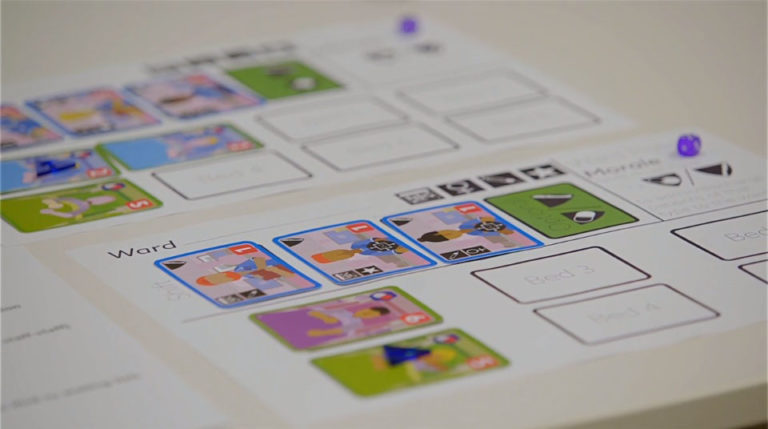 It can be hard enough getting through a four-person game of Monopoly without somebody forgetting the rules or storming off halfway through. Yet ‘Megagame’ EnTRUSTed, developed by HeRC and the Farr Institute in conjunction with Connected Health Cities, requires at least 40 people to play, tasking them with working together to run a simulated Hospital Trust.

EnTRUSTED is back in November after a highly successful first run earlier in 2018. Fancy finding out how a 40+ person game works, and how to sign up for the next one? Read on.

The game was open to anybody and players included members of the Centre for Health Informatics, NHS staff and seasoned Megagame players. The event was attended by games blogger John Sear, who has written a piece on the game here.

At the beginning of the game, players divided themselves into two teams, which each became a separate Hospital Trust. The Trusts were then further divided into a hospital, which focused on the day-to-day treatment of patients, and a board, which managed higher-level decisions.

These two groups carried out their daily tasks using a mixture of token exchanging and puzzle solving. For example, success in the operating theatre was determined by how quickly surgeons completed logic and spatial puzzles along the lines of the ‘car park puzzle’. Elsewhere in the hospital, nurses balanced seeing enough patients and avoiding ‘tiredness tokens’ which, if the nurse was holding too many, would force them to sit out a turn in the ‘nurse rest area’.

Meanwhile, the board carried out tasks such as reviewing staffing policy, dealing with public relations issues and communicating messages from the ‘Department of Health’ to the hospital staff. These messages would usually be conveyed by the Directorate of the hospital, who worked with both groups. 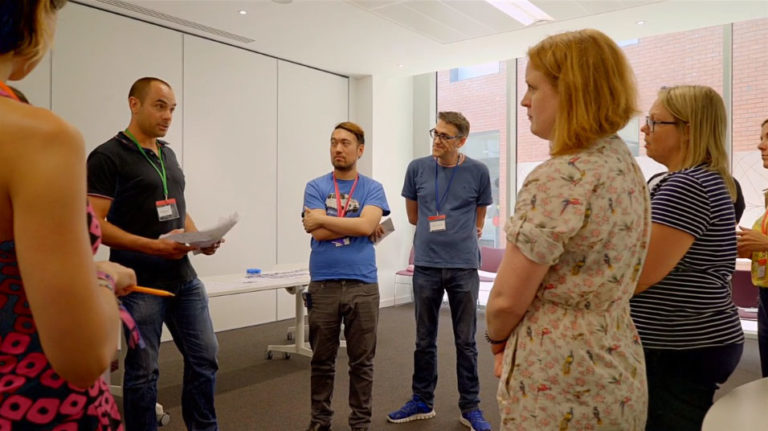 Unsurprisingly, effective communication between groups was one of the major challenges of the game. Ruth Norris, who was playing as a nurse, said ‘When the pressure was on, everything descended into chaos. Nobody knew who was running the show, and everybody was making their own decisions without telling anyone else.’

And if the day-to-day running of the Trust wasn’t challenging enough, players would be hit by unexpected crises and changes which forced them to think on their feet and adapt quickly.

For example, one board felt the Trust was doing so well, it wanted to promote their work through the media. Carol Ann Costello, who was playing as a surgeon, found herself having to answer questions while carrying out her ‘surgery’. ‘It was a sudden change of tactics,’ she said. ‘I had to quickly change my way of thinking and figure out where my priorities were.’

Yet despite these challenges, players ended up pulling together to effectively run the Hospital Trusts, and ultimately finished on a high.

‘It’s a brilliant game,’ said Ruth. ‘You learn a lot about yourself as well as about hospital systems.’

‘The response from our players has been wonderful,’ said Ben Green, co-creator of EnTRUSTed. ‘I hope we get more opportunities to both run this game again and create new ones based on other settings.’

Convinced you have what it takes to successfully run a hospital trust? Come and join us at the next session of EnTRUSTed, which will take place from the 28th-29th November in Chancellors Hotel, Manchester. (Overnight accommodation and meals will be provided.) Find out more and register your interest here.

Or, if you’d like to host a game of your own, EnTRUSTed is available to be played by any organisation. If you’re interested in organising a Megagame for your team, get in touch with Ben Green at benjamin.green@manchester.ac.uk.