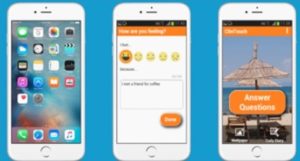 Serious mental illness (SMI) affects 1-2% of adults in the UK and those affected are often at high risk of relapse after their initial episode. Relapse can result in unplanned admission to hospital which can be traumatic for service users and their families and is very costly to the NHS.

ClinTouch is a mobile early warning system that aims to reduce or prevent relapse and allow people with SMI to better monitor and manage their own symptoms. If ClinTouch can reduce 5% of relapses, it will save the average Trust £250-£500k per year. Affigo is a spin-out community interest company that was created to roll-out ClinTouch across the NHS to empower people to monitor and manage their own health. Find more information here: https://www.affigo.io/

Service users receive 2-4 prompts at semi-random times during the day and they are asked to rate their symptoms using a sliding scale on their smartphone.  This symptom data is wirelessly uploaded to a secure central server which can be accessed via the CareLoop clinician web interface.

This interface gives clinicians access to real-time symptom data for the service users under their care and also alerts them to any worsening of symptoms which are suggestive of a potential relapse.  These alerts enable clinicians to decide whether to intervene to try and prevent symptoms from getting worse and resulting in a relapse.

Data will be collected using a smartphone.  The symptom data can also be accessed and used to inform future clinical consultations and service users can access their symptom data so they can monitor how they have been feeling over time.

Service users, carers and clinicians could all benefit from ClinTouch working effectively to reduce or prevent relapse.

To detect early warning signs of relapse earlier using ClinTouch than by the current method of recording worsening of symptoms in the electronic case records, which is largely dependent on the frequency of clinical meetings and reliance on the accurate recall of symptoms by service users.  ClinTouch collects real-time symptom data which improves accuracy and allows more immediate intervention.

Using ClinTouch can detect early warning signs (EWS) of relapse earlier than the current method of recording EWS in the service user’s case notes. Earlier detection of symptoms worsening can result in earlier intervention and thus prevention of relapse and readmission to hospital. We have also found that service users’ self-efficacy increased whilst they were using ClinTouch and they gained greater insight into their illness as a result of daily symptom monitoring.