Members of the DCRC at 2016's annual meeting hosted in Reykjavik, Iceland 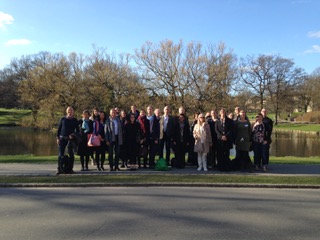 Diabetes and cancer are common chronic disorders. In Europe alone, there are 55.4 million individuals living with diabetes, mainly type 2 diabetes (T2D); while there are an estimated 3.5 million new cancer cases per year.

Estimates of the co-occurrence of prevalent diabetes and cancer are age-, sex-, population, and cancer-type specific but, for example, in a study from the Eindhoven Cancer Registry, the Netherlands, the prevalence of type 2 diabetes among patients with cancer of the pancreas was 19%; uterus, 14%; and among young men with kidney cancer, 8%.

The DCRC are a specialist international collective that comprises leading researchers in the field of diabetes and cancer.

Scroll down to see a list of recent publications based on DCRC collaborations.

The Diabetes and Cancer Research Consortium (DCRC) was formed in 2010 in response to a controversial publication in Diabetologia in 2009 claiming an association (safety signal) linking the use of anti-diabetes therapies (insulin Glargine) with a higher cancer incidence; a finding not supported by other studies published in the same issue.

In order to resolve these issues, EASD appointed Edwin Gale, Andrew Renehan and Bendix Carstensen to form a task force to advise EASD on the topic (Resulting in a consensus as: (1) and (2) in Diabetologia in 2012). The former EASD Diabetes and Cancer Task Force was established in February 2011, by the then President of EASD, Professor Ulf Smith, with a 3-year window of activity in the first instance. At the 2013 EASD Annual Conference (Barcelona), this group became an EASD Study Group – The Diabetes and Cancer Study Group (DCSG). Its core business is the Diabetes and Cancer Research Consortium (DCRC).

Find out more about the 2017 activities of the DSCG

Here you will find a full summary of the DSCG activities in 2017.

The central objectives of the Consortium are:

Our founding members – Ulf Smith (former EASD President); Edwin Gale (former editor-in-chief of Diabetologia); and Andrew G Renehan (DCSG Chair) – are keen to retain visible affiliations with other related organisations such as European Cancer Organisation (ECCO) and the European Association for the Study of Obesity (EASO).

Find out more about the DCSG

The DCRC meet annually with each workshop supported by and feeding into the EASD. The meetings are to discuss progress in the research area, present ongoing work, and to plan joint publications.

Publications based on DCRC / DCSG collaboration

"We have created a unique setting in the DCRC for world-leading researchers to come together as peers and discuss and debate their work openly. It is fantastic to see such a wide range of nations united in advancing our understanding of the relationship between T2D and certain cancer types."